At the Dzogchen school 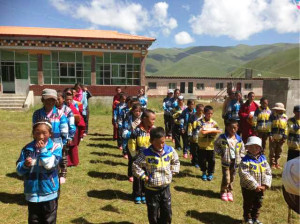 Quite a few changes at the end of the school year! Having passed their primary school final exams, five of the eldest students have expressed a wish to continue their studies, and to do so as monks at Dzogchen monastery.

This wish is perfectly traditional among Tibetans, with parents proudly approving their children’s choice for the Buddhist path and the monastic life. Six other students, having completed their school career at Dzogchen, have returned to their families to offer much-needed help in the everyday cares and tasks of the nomadic life.

Their places at school have already been taken by new young students, including some ten children from Dzogchen village who follow tuition without taking board. 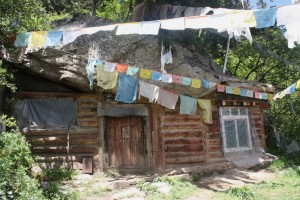 Cave with wooden closure, at around 4,500m altitude. Caves like these are estimated to be a few hundred in the mountains surrounding Dzogchen.

In the Dzogchen area, its culture steeped in Buddhism, meditation retreats are an age-old tradition.

A retreat centre was already established in the 18th century, but numerous practitioners then and now prefer more rudimentary and solitary quarters, whether wooden cabins or mountainside caves.

With little or no heating, these residences offer only minimal protection from the elements, including winter lows of -30°C. Practitioners take a supply of non-perishables with them and, as the snows disappear and the retreat spots become accessible again, villagers bring them provisions. Retreatant and supporter are said to accumulate equal merit in this way…

Retreats can be short-term, but the 3-year-and-3-month retreat is often embarked upon, and it is no rarity for practitioners to commit themselves to life-long retreats. In the old days, certain practitioners would even wall themselves in completely to avoid any distraction from their spiritual practice, leaving only a skylight to be handed food through…

Today, male and female retreatants still play an essential role in Tibet. Both their positive influence and the qualities and knowledge they develop and will be able to pass on, are highly valued by Tibetans. 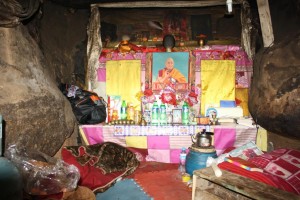 Retreat cave interior. Centrepiece of these austere quarters is the altar with its statues and texts, the practitioner’s meditation supports. 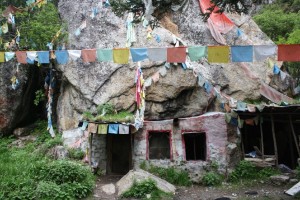 Cave of Dzogchen Patrul Rinpoche, near the tree line, at about an hour’s walk from the village. A practitioner is currently on a 3-year retreat in this cave.

Certain caves are particularly famous for having sheltered great masters. It was in a cave overlooking the Dzogchen valley that Dza Patrul Rinpoche (1808-1887) composed his famous book ‘The Words of my Perfect Teacher’, still one of the most used texts for its instructions on Buddhist practice and meditation.

Our heartfelt thanks to…

– Maxime, who has donated the money of his first communion present to the Sambhota school;

– the Fraen a Mammen of Redange and Bascharage, who have supported us with the proceeds of their charity work;

– the Luxembourgian students of Karlsruhe, who organise a sponsored cycle tour back to Luxembourg at the end of every university year and have chosen the Sambhota school as their good cause of the year.